Have you been thinking about buying your own Home Weather Station?

The long-range NOAA Winter weather forecast for the Pacific Northwest claims for the first time in many years a strong La Nina climate ‘situation’ is already aligned on the West Coast. So (allegedly) I should expect more precipitation and it will be much colder here compared to the last few years … translated, that means I should anticipate and be prepared for at least one significant snowfall and at the very least, ice or frost on our windshields in the mornings.

Last week, I bought the Home Weather Station pictured below to be able to watch storms develop and I will be able to compare and share information with friends in our region who have similar weather stations.

Mounting the Sensor Unit: how and where should I mount it? The owners manual has a lengthy list of places where it should not be mounted including near swimming pools or spas, asphalt driveways or concrete foundations and retaining walls that are baked by the sun and far away from rooftop mounted air conditioner units and heat pumps.

But … if it was mounted high in the sky on an antenna mast, that would be the easiest way to locate it away from anything that might skew its reports and allow it to collect more accurate wind speed and humidity data. “Make it so” – as Star Trek’s Captain Pickard would say. 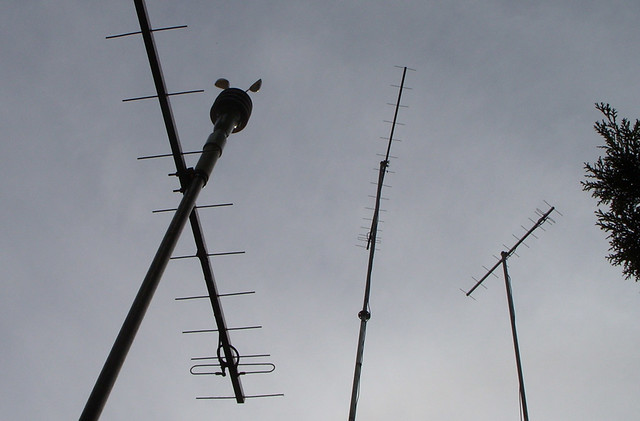 The unit featured in this article operates on or around 433 MHz, just above the 440 MHz Ham Radio Band and it should not interfere with free over-the-air Television reception or any other service. The outdoor Sensor and indoor Display Unit can be as far as 330 feet apart from each other and they suggest the Display Unit should be mounted with its back side facing Colorado for its digital clock to be able to self-update. That function is accomplished using received data from short-wave Radio Station WWVB at the National Bureau of Standards in Boulder (atomic clock). 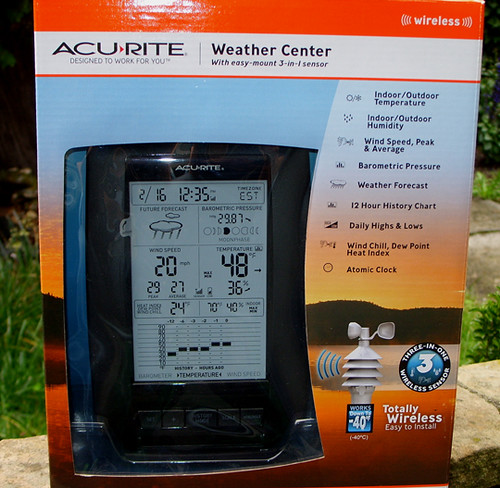 For accuracy, any Weather Station needs to be above local obstructions that alter wind patterns, so ground-level mounting will always be inaccurate for wind speed. Also, the Sensor/s should not be located near anything that contributes heat into the atmosphere, such as on a short antenna mast on a chimney. Those would be poor locations for Weather Sensors.

If you want to build your own mount for an antenna mast, the photos below show you how to do it on the cheap! The mounting setup below cost me $3.24 plus sales tax. 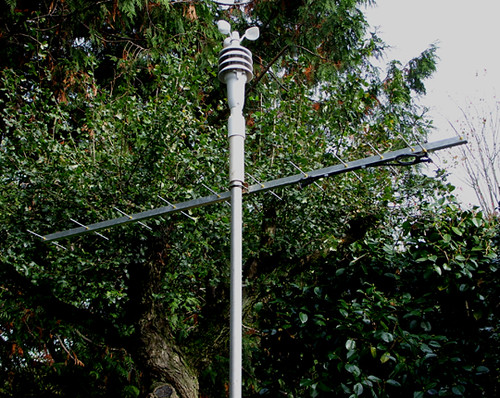