Sunday evening 05/23/10 I attended Red Green’s live show at the Highline Performing Arts Center, just south of Seattle in Burien, Washington. The theater which is adjacent to Highline High School holds 794 and I counted 3 vacant seats. The crowd was about 2/3 men, 1/3 women and teenagers. At least 10 men were dressed exactly like Red Green with the same style hat, suspenders and pants. Many of the men in the audience wore clothing similar to what the Possum Lodge members wore in the television series: beige or blue pants, plaid shirts and suspenders and others wore red and green including the man sitting next to me. 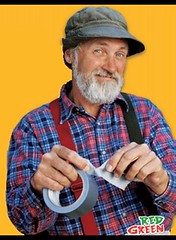 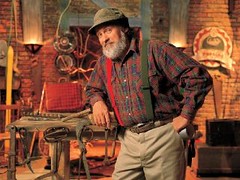 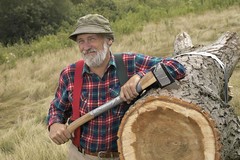 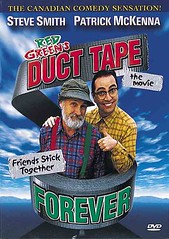 For readers unfamiliar with the Red Green show, it was a unique half-hour comedy television show produced by CBC Television (Canada) from 1991 to 2006. Three hundred episodes were produced and it has been carried on PBS channels continually since it was first aired. In 2002 they produced a full length movie titled Duct Tape Forever, which received mixed reviews (personally, I enjoyed it). http://www.imdb.com/title/tt0286915/

Before his one-man live show started, it was announced Red Green (Steve Smith) was donating all of the proceeds from the event to KBTC-28 (27 OTA) –> http://www.kbtc.org/Tacoma, WA. so as a PBS television station fundraiser, this was a very successful event earning around $40,000 minus expenses. Earlier in the afternoon, Red Green held a ‘free’ event at the True Value Hardware Store in West Seattle. I would have been there had I known about it. Here’s the Wikipedia Link to the show: The Red Green Show – Wikipedia, the free encyclopedia

His show started with the familiar theme song and when Red walked on stage he received one of two standing ovations. We took our seats, the room went quiet and someone in the audience shouted, “Where’s Harold?”Red snapped back in his gravelly voice “Who cares?”The crowd was delighted by his answer and that was only the beginning of the show.

Rather than using a teleprompter, Red used his own version of ‘sticky-notes’ – a dozen sheets of paper duct-taped to the front edge of the stage as notes to himself. He talked about how the original show was assembled and funded saying he asked for just enough money to get the show started but not enough money that the network would care and get involved. He wanted to have as much control over his show as possible.

He shared his sage wisdom and opinions about current events including Old Man Sedgewick and his experience using Viagra, “like a rotted sunken sailboat given a brand new mast”, Canadian socialized health care, “if you’re not willing to wait for it, you’re probably really not that ill”,Global warming “Last winter it was over 80 degrees below zero in northern Canada – we don’t see a lot of Al Gore up there”,Canadian/American border issues and so much more.

Every ten minutes or so, he broke into song and sang a new ‘story’ to us and in the typical Red Green fashion, the last line of every song had three times as many words in it as it should have.

He expressed his opinions about young people and how ‘we adults’ need to give them a break because hormones are driving them, “Yes, my friends, they really are out of their minds”.He talked about the tattoo fad and how 40 years from now after they have faded and sagged, “Do you really want to have a surgeon laughing at you when he’s cutting on you?” He waxed about the importance of the education young people receive and noted the popularity of piercings, “I finally got used to men wearing ear rings, but what’s with the loops in the noses, lips or even in their … personals’? What are they? Mooring loops so their parents can anchor them to a table to make them do their homework?”

He explained the Possum Lodge Motto: Quando Omni Flunkus Mortati (When all else fails, play dead) and of course, when asked to say The Men’s Prayer, every man stood up and followed thru with the ritual: “All rise”… I’m a man, but I can change, if I have to, I guess … “Sit down”. There are many Red Green Show segments from his televised series that can be seen here: http://www.youtube.com/results?search_query=Red+Green+Show&aq=f

The Red Green Wit and Wisdom Tour is coming to eleven more cities across the Country and information about the venues and dates are available here: Red Green News The 90-minute show was very enjoyable and I hope you get to see it.

By the way, keep your stick on the ice!

New On Netflix This Week

Can You Eliminate Cable Without Losing Your Favorite Television Shows?

Most Viral Videos This Week

Simplify your life with a new Remote Control