This legislation requires the National Telecommunications and Information Administration (NTIA) and the Federal Communications Commission (FCC) to create a detailed inventory of radio spectrum bands, as well as a centralized portal or website to make the inventory available to the public. The NTIA and the FCC are also required to (1) submit an annual report to Congress updating the status of the inventory; (2) identify the least utilized blocks of spectrum inventoried; and (3) recommend whether any such spectrum should be reallocated.
Click to expand...
HR 3125 has been placed on the calendar for consideration in the Senate, but that chamber has a similarly-titled bill, S. 649, under consideration. It's not clear yet how, or whether, the bills will be reconciled.

I'm of mixed opinion on this. On one hand, the National Association of Broadcasters strongly favors the bill on grounds that all players should know exactly what spectrum is being used, who's using it and what's not being used before any discussion of re-allocation proceeds. Sounds fair enough.

On the other, the majority sponsor is Rep. Henry Waxman. This is the same chairman who loudly ordered executives of Caterpillar, Deere, Verizon and AT&T to appear before his Energy and Commerce Committee for a public flogging after they dared to mention that the just-enacted health-care reform law will cost them additional sums in the eight- and nine-digit range. Waxman didn't back down until last week when the committee's staff gently reminded him in a written memo that each of these companies was merely complying with financial-disclosure provisions of federal laws applicable to publicly traded companies. Given Waxman's lengthy record of demagoguery, one wonders: What's he got up his sleeve this time?
Last edited: Apr 19, 2010

#2
Quite honestly, when politics gets into it, my brain explodes. It's over my head.

Staff member
#3
So is the FCC going to eye up unused radio spectrum and take it away too, just like the TV spectrum?

#4
Aaron62 said:
So is the FCC going to eye up unused radio spectrum and take it away too, just like the TV spectrum?
Click to expand...
It's kind of doubtful given the wavelengths involved -- and the size of the antennas needed to capture signals at those frequencies: FM is roughly 3 meters, while the wavelength of AM signals range from about 187 meters to more than half a kilometer.

This page at NTIA's Web site contains links to download the most recent United States spectrum allocation chart in bar-graph and tabular forms. Spend a little time with the chart, and it becomes obvious why the broadcasters are hollering about being an "ATM" for greedy broadband concerns: The federal Leviathan is sitting on a heckuva lot more usable spectrum than the less than 300 MHz that's currently allocated to TV channels.

Thank you for the link. I am astonished how much spectrum is being reserved for 'passive space research' looking for E T, I imagine. It makes more sense to put radio telescopes in orbit and free-up those parts of the spectrum so the kids can play Space Invaders and Asteroids on their cell phones and leave the remaining OTA TV bands as they are.

#6
Space Invaders?!? Holy cow, you've dated us: Last time I saw a reference to SI was on the side of a pinball-machine-sized video game in a "That 70s Show" rerun.

Thank you for the link. I am astonished how much spectrum is being reserved for 'passive space research' looking for E T, I imagine. It makes more sense to put radio telescopes in orbit and free-up those parts of the spectrum so the kids can play Space Invaders and Asteroids on their cell phones and leave the remaining OTA TV bands as they are.

Jim
Click to expand...
Do you know how big those radio telescopes are? Some are bigger than football field. Exactly how do launch that into space? Radio astronomy takes up what Ch 37? That's what 6 MHz? How about cell companies actually use the 108 MHz they just got last year first before asking for more?

#8
BCF68 said:
Do you know how big those radio telescopes are? Some are bigger than football field. Exactly how do launch that into space?
Click to expand...
NASA put the Hubble Telescope up there two decades ago, didn't they? Then again, that was only 190 feet long and 25,000 pounds...

Click to expand...
OK let see them launch this baby into space 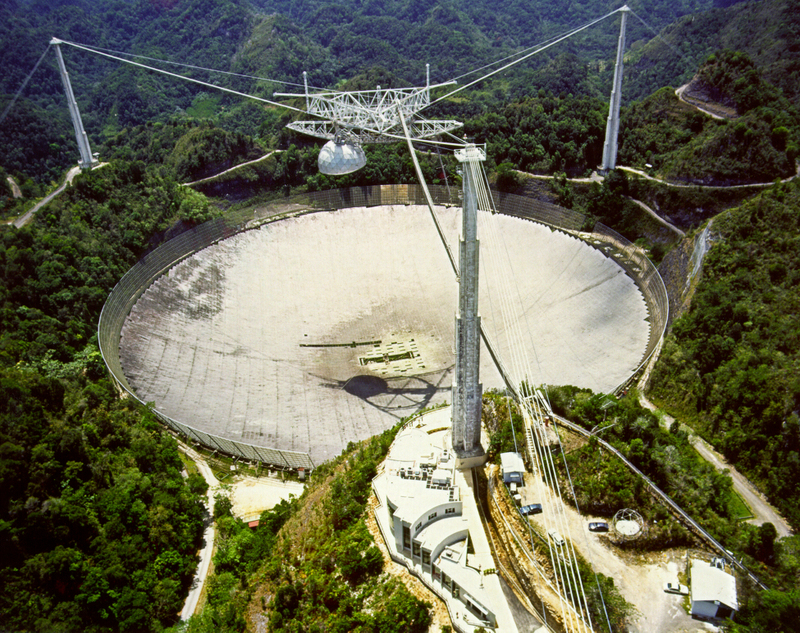 Click to expand...
hehe, the thing is most of the space station has been put together piece by piece which could be done with a "large" dish as well, but something that size would just be too big for any kind of man or unmanned space vehicle in our arsenal right now.

Hi, sorry to bump an old thread, but... I was looking for info on where the broadband bandits could steal bandwith, other than OTA DTV, and came across this thread.

Arecibo radio telescope in Puerto Rico is built into a natural depression (sinkhole) of spherical shape. It's also unsteerable!

Small lunar craters have these attributes:

1. Simple craters - essentially a "transient cavity" with a little breccia and melt on the floor.

The back side of the moon would therefore be the perfect place for large radio telescopes. A network of them, in a line from N to S, could cover the whole sky in a month. Unfortunatly, we won't be going back there anytime soon. Maybe the Chinese, but not the USA. And then there's the cost...

Radio telescopes suffer from "radio pollution" just as optical telescopes suffer from light pollution (how many of you have NEVER seen the milky way because of city lights??). Once you use that part of the spectrum, they cease to become useful instruments. Mt. Wilson observatory's 100 inch optical telescope in California is no longer of much use for the deep sky studies it was built for. Low pressure sodium lights work well because their spectrum has a very sharp peak in a small band, and are energy efficient, but people complain because "I don't like the color" (they'e yellow) C'mon, they're outside, what difference does it make?

SETI only uses a small amount of time on radio telescopes. Most are used for mapping and spectrum analysis. Some mapping of nearby objects is done with radar.

Of course, if SETI does find someone out there, all these arguements will be pretty pointless, since they would probably be more advanced than mere earthlings, and would have answered many of the questions we have about the universe. Or they might be on their way here to have sex with overweight toothless trailer park dwellers and eat our brains, because evey alien within 100 light years knows we're here. Either way, problem solved, all that bandwidth would be freed up.