#1
If her name sounds familiar that's because she's listed in the credits of many classic tv shows as HAIR STYLIST...FLORENCE BUSH. And much like Mr. Schwamp, little is known about her.

IMDB has a list of her screen credits here Florence Bush - IMDb with her final screen credit being from 1972, it's safe to assume she's passed on.

I took an interest in her a few years back after seeing her name in so many credits so many times. Who was she? Was she still alive? What did she look like?
I never found an answer to any of those questions.

Checking again tonight after seeing her name yet again, google turned up this result with a picture of Florence included (with a bobby pin in her mouth no less )

Not a great picture of her but at least it's something. I also did a Find A Grave search tonight and that turned up nothing too and that's just sad...but at least there's a picture of the lady now.

There's gotta be something more about her out there somewhere?
T

#2
What a neat article! I have to admit, I've never noticed her name, ever...and I've watched my share of old tv shows. Now I'm going to have to keep an eye out for her from now on. And I found it really interesting that she was so meticulous about the type of hair used for various Indian tribes...thanks for sharing this info! (Now I have to figure out who Mr. Schwamp is.....) 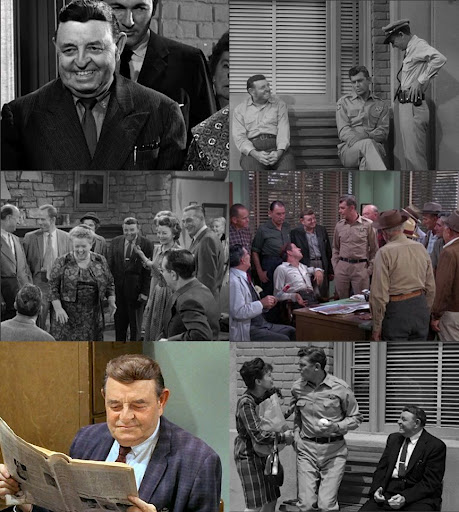 He appeared at least 26 times on The Andy Griffith Show but never spoke a line so his real name was never listed in the credits. To this day no one knows who he really was. No one. It's a mystery of the ages!

He looked a little like Arthur Godfrey though.
G

Thanks so much for posting this. I've always wondered about the person connected to that TV screen credit name, and now I know a little. It's too bad there's not more mention of her in TV archives and whatnot. Apparently, she contributed to the medium for a long time.
D

#6
For the past few years I've been researching her in hopes of making a documentary about her someday, but ya..too little info exists
R

#7
Well, she did 235 episodes of "Leave It To Beaver," right? Tony Dow or Jerry Mathers must remember SOMEthing.

#8
Love the article on Florence Bush

Love the article on Florence Bush! What an interesting life! Imagine the people she met.
G

#10
I saw an episode of Make Room for Daddy. The hairstylist was Florence Erickson, perhaps that was her maiden name?
G

#12
Thank you very much Guest poster!

I did search for her in the Glen Haven Memorial Park cemetery on the "Find A Grave" website but found nothing under their "famous person" search option so switching it to search for everyone at Glen Haven, this came up...

Bless her heart, and yours too for clearing this up.

Now if you could figure out who Mr. Schwamp is.

Seriously, Thank You again for the enlightenment.
D

#13
Great research! I am an Andy Griffith show fan and mr. Schlump is the biggest mystery still unresolved about the show. That mystery will be solved as well in this age of unlimited info.
G

#14
Florence Bush Erickson was a contracted employee of the Desilu Studios throughout the 1950s. Once the studio was sold to MCA, then Universal the role of Hairstylist to television shows such as Alfred Hitchcock Presents, Chiller, The Danny Thomas Show, Leave It To Beaver, and The Munsters, turned to Larry Germain.

Due to society standards at the time, upon marriage, Florence Bush Erickson stopped working. She did come back late in the 1960s (early 70s) but the times had changed and hairstylist were no longer contracted. Stars chose whom they liked.

Hope this helps with your query.
M

My mother said that she thought it was the same Florence Bush she went to school with.
L

#16
I too, have always wondered about Florence Bush. Another name that interests me is Edith Head, for the clothing/costumes.
G

I have seen her name in the credits of all of the Alford Hitchcock TV series. So I googled her to see what she looked like because she is been on so many TV shows as a hairdresser.
G

#18
I've been watching old Westerns from the 1950's and the 1960's and see Florence Bush's name as the Makeup Artist, Just wanted to see what she looked like, She's worked side by side with a lot of major actors. I've googled her name and can't find one picture of her anywhere ? Sure would like to see a picture of her.
G

#19
I am a Bush, and have wondered, for many years, is we were the same Bush family.
G