#1
Long ago, my father was making the switch to Satellite from Antenna TV. He was happy about the switch for a few months. Time came up for the 3-month special. The truth about Satellite came to him in an envelope, in the form of a bill. So, I came to visit to witness how much the bill went up. We thought about the Antenna again, and my father did some research I guess. A few weeks later he calls me up, and asked if I had any old TV's (lol?) not that I know of. I go over to find he had tried to rush and screw on the coax on the F-connector resulting in striping it. Furthermore lol, out of frustration he ended up breaking it off of the TV. It was on the corner of the Circuit board, or not really even part of the circuit board. I remember I tore down the TV, and he soldered it (this is when I started learning to solder).

(This story could also be removed if sticky'd)

We installed a 3 foot Coax to every TV with an F to F connector (I call them splices). This way if you are doing a lot of switching out antenna's or anything in this connection for that matter (DVD RF converters, VHS -if still used-, Cable, Satellite, etc...) If you do this to every TV you have you only destroy the splice/F to F connector instead of the only connector on your TV or F-connector device, instead you would simply replace the splice/F to F connector. Much easier fix!!! Just a helpful thought to save your poor TV F-connector, and later a major headache to fix it! In some cases I guess the TV failing may be an omen! lol However, at least you can decide if that is choice you wish to make. I'm not sure where to get these short runs of cable (I'd tell the cable company you need shorter cables to help with reception before you decide to cut the wire, this way it is quality, and usually Free)! Some people have higher morals though so you may wish to look elsewhere, not me!

Maybe this will be useful or maybe not, I just wanted this info to be available.

Staff member
#2
Great writeup. Is this the type of F-Connector you're talking about? 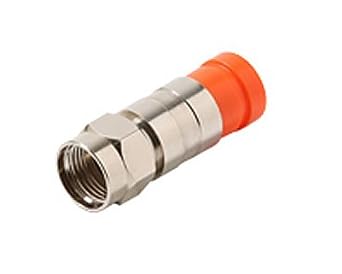 #3
Well, I think what I was suggesting to save the TV jack (may have miss-worded it. I always say Jack when I mean plug, as Coax kind of goes in a different way than headphones lol). However, also yes to make the patch cable from the TV to the pic I added below. Quality may or may not be needed for your application or use! If you feel like you lost some signal, you may have purchased a "too cheap" F-splice. The pic I posted are for indoor use only, unless coupled with some kind of kit (even then, the price on these, I'm not sure I would even consider them outside use either way!)

Now these are super el'cheapo's but just for reference. Feel free to use whatever quality you wish, but for less loss, apparently there are some very sophisticated "Low-Loss" splices, also they have underground, and waterproof splice kits.

P.S. I'll be reading the Jack / Plug forum post yet again!!! Some day I will get it right! :icon_beat:

They are often referred to as 'double females' or sometimes barrel fittings.